I’ve never supported lesser-evil corporate Democratic Party candidacies, so it took me some time to warm up to the idea of actually voting for someone who is a Democratic Party candidate. But I voted for Bernie in the Move-On endorsement poll, and I’m even planning to change from my Green Party voter registration in order to be eligible to vote for him in the Californian primary. I still won’t donate money to or volunteer for the campaign—there are limits to how much I can allow myself to buy in to federal electoral politics in the US. 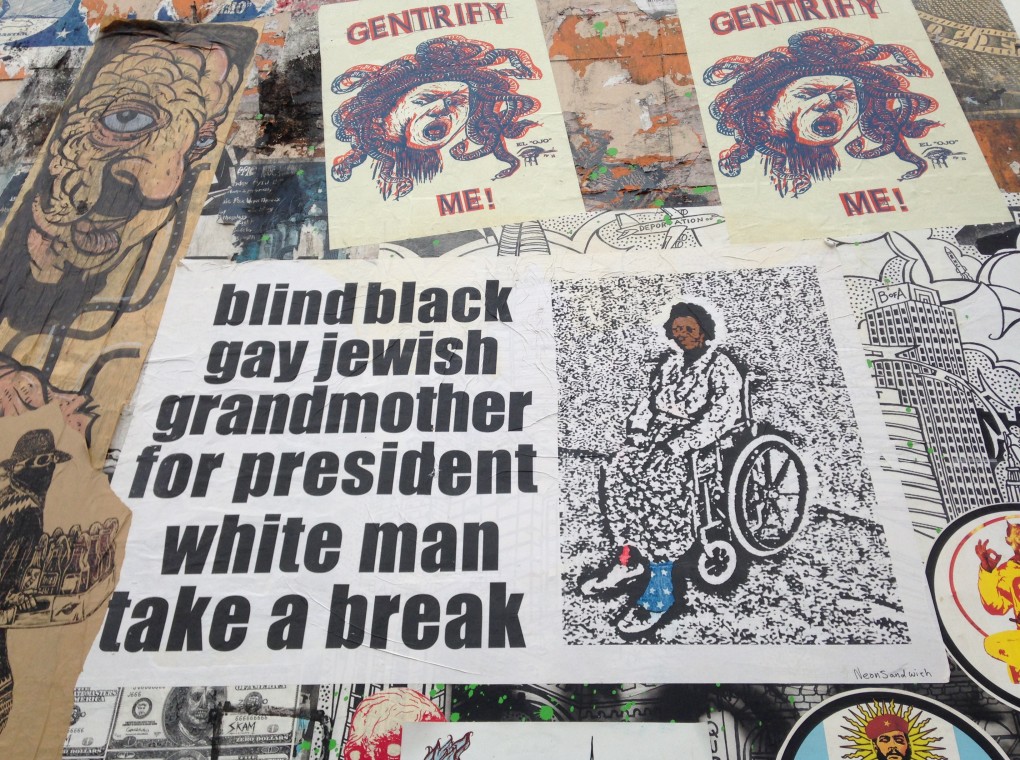 So maybe it’s a mild 1st degree “bern”, but I’m definitely feeling it. Sometimes I even get excited about Bernie Sanders’ candidacy. Why?

Because I find it hope-inspiring that as this avowed socialist [1]—who doesn’t take dirty money for his campaign and has a pretty consistent record on many progressive and pro-working class issues—campaigns, the more people hear about him and his positions, the more they seem to support him. I see Sanders as soaring upwards on an upwelling of bottom-up energy for major social change, and that energy excites me. And some argue that he could actually win in the general election.

As Nivedita Majumdar says in Jacobin,

Sanders doesn’t offer anything close to a comprehensive solution for the myriad problems facing the poor and oppressed, and some parts of his political agenda are genuinely backward. But when we place his candidacy in the context of the challenges the Left faces, the orientation of his political rivals, and the incredible enthusiasm he has generated in a climate of general defeat, the attacks on him from the Left become harder to justify.

I was already interested and thinking about the potential outcomes of the nominating conventions this coming summer, when I read this article, stating it is “Time to Transform Bernie’s Campaign Into a Permanent Organization”.

An interesting idea, I thought—depending on what the author (Miles Mogulescu, “an entertainment attorney/business affairs executive”) means by “organization”, and how they conceive of this organization and its potential political effect. But right away, I knew the article would fail, when Miles proclaims that the choices for the campaign are either to create a “permanent organization that can carry his political revolution forward in the long-term; or whether, like Occupy Wall Street, it will quickly disappear.”

This statement shows a classic liberal position that does not take seriously the lessons of histories of social change. Social change at the level of nation-state behavior—major social change—has always been the result of disruptive and mass action “from below”. Piven and Cloward make this argument forcefully (about the United States in particular) in their book “Poor Peoples’ Movements”, and in Piven’s more recent book “Challenging Authority”.

I won’t rehash their arguments here, but the lesson is that Occupy Wall Street, the Ferguson-related uprisings, the anti-fossil fuels/climate change direct actions happening around fracking, pipelines, and fuel transport infrastructure, the “Fight for $15”, and many other movements from below are what made Sanders and his message viable in the first place. Without these movements, which the article author would dismiss as having “quickly disappeared”, there would BE no Sanders movement to build an organization off of.

Pushes from outside of power centers (like the federal government) are absolutely required to gain concessions from elites—no matter who is in office. If you add to this the lack of real power in the presidency—with regards to the formal and informal nodes of power in federal government; that is, the corrupt election finance and lobbying networks, the entrenchment of the military industrial complex, and the structural (and mostly ignored) conservatism of the Supreme Court—you’d see that angling for the presidency is perhaps the LAST thing that “progressives” should be spending their time and energy on.

Building social movements that create disruptions, change the public discourse and “common sense”, gain allies from existing elites in positions of power, build their own forms of non-state power, and yes, at times work to put new “better” elites into power through electoral campaigns, is the key task for the Left.

This is decidedly NOT the same logic as Mr. Mogulescu prefers: “If Hillary is the nominee, the initial task will be to critically support her and prevent Trump or a Republican from taking the White House.”

I’m sorry but I will not support Hillary, and existing polls indicate neither will about 1/3rd of Bernie’s supporters. I like to think this is because these people are wise to the game of corrupted, dynastic politics like those represented by Clintons and Bushes—and we want no part of it.

I agree that we need to think “beyond Bernie”, but not in the way outlined by this article.

We need to radicalize the analyses being offered in public (e.g. to offer solid racial and class analyses of the issues working class people face), while combining sustained strategies of institution building with disruption and service to the most marginalized. We need to think of creating new—and sustaining the existing—broad-based movements that will continue to disrupt, while creating alternatives that work on the ground.

This might be a “network”, sure. But it certainly should not be one that saps movements’ energies towards running for office (much less federal office), and that orients towards creating a professionalized cadre of “organizers”. Those organizers—if we follow the schema described by the white, middle (upper?) class author of the article—will very likely be white, middle class, and end up simply recreating the structures of political organization that haven’t actually changed, and won’t actually change, society.

The fact that Miles is willing to lay out an entire program for how this organization should be rolled out is emblematic of the fact that people like him refuse to let “the people” organize themselves; liberals believe in the state and the power of strong leaders to make movements and states “successful”. Radicals, in contrast, believe in the power of people themselves, to lead and to struggle.

The energy created by Bernie’s campaign should go back to the people themselves, and the movements that are already doing “the work” of the (non-electoral) Left. Certainly someone will take advantage of the political interest generated by the campaign: the small donation based fundraising efforts that have worked for Bernie could (theoretically, but probably not easily) be channeled into the many forms of movement organizing work. But not if they are simply channeled into an organization that essentially mirrors and replicates the Democratic Party.

So back to predictions, what might happen, and how might an expanded organizing effort look beyond the nomination and election?

If Bernie loses the nomination and throws support to HRC, I hope to see riots in the streets. But more likely, there’ll be a lot of fighting and moral castigation between lesser-of-two-evil’ers and rejectionist voters, and it’s possible that few enough will hold their nose and vote for Hillary such that the Republicans might win. Not a happy thought, but then again, the thought of Hillary winning is absolutely no comfort to many in the US and outside it. (For sure, Hillary’s fandom of fracking is indication that climate change will continue unabated if she were elected.)

If Bernie loses the nomination, but runs as an independent, he could win, and even is even more likely to if Trump also decides to run independently after failing to win the nomination (some argue that there is no way the Republicans will nominate him). If this were the scenario, Trump would draw many voters from the Republican Party, while Independents who don’t like Trump would likely go with Sanders. Independent-identifying voters especially prefer Bernie to Hillary. Hillary is the most disliked of the bunch, followed by Trump. Bernie is generally liked (and like I mentioned, the more people hear his platform and speeches the more they like him). This scenario would be total chaos, and I’d like to think it would shake up the political imaginary a bit, since it might be the first time both entrenched parties have substantial competition beyond themselves.

We need to understand that it’s ultimately not about Sanders. It’s about the political moment the campaign has created and its possibilities. Sanders’s anti-corporate, pro-working-class electoral campaign, has against all odds electrified millions. Whether the Left rejects or chooses to take advantage of this opening may well define its trajectory for a long time to come.

Perhaps we should be more cautious about a Bernie victory. Aside from the problems he’d face inside the political system, think about what has happened to other recent Left electoral victories: Evo Morales in Bolivia, selling out the country’s natural resources and indigenous people as he champions himself a “socialist”; Greece’s Syriza, who turned on the population that elected them to oppose austerity, when forced into an uncomfortable position by the EU and creditor elites. The fact is, creating substantive change at the nation-state level is exceedingly difficult against structural constraints—no matter who is leading the party.

So prepare to be disappointed by Bernie, if he is elected. Or better, know the limitations that will be placed on him, and organize for change as though it didn’t matter who was president. As I’ve tried to emphasize, movements are what cause change. Elections channel change energy, not very effectively. Yes, let’s think “Beyond Bernie”, but not towards an election-focused movement, but towards a transformative one.

[1] Even though he’s not really, he’s a social democratic capitalist statist, albeit one who strongly favors redistributive welfare measures.